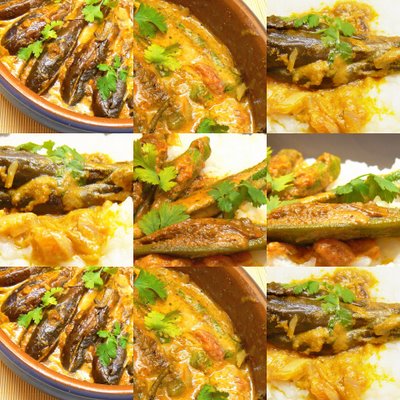 My hubby is a vegetable lover and is a firm believer of 5 portions a day. I tease him a lot because he eats more vegetables than rice. Our refrigerator filled with all sorts of veggies except for one vegetable, Brinjal/Egg Plant. Oh no!! It’s not because he hates it, it’s just that he is little allergic to it. Before marriage one of the very few vegetables I used to eat was Brinjal. My Amma is an expert when it comes to cooking different egg plant dishes. After marriage I hardly cook anything using brinjal. But after seeing wonderful recipes of egg plant in other blogs I couldn’t stop making one of my favourite dish Stuffed Baingan. I didn’t feel like cooking it just for myself. So after thinking a little I thought of making stuffed Okra for my hubby using same ingredients. This is my Amma’s recipe of making very tasty dish using very little oil. 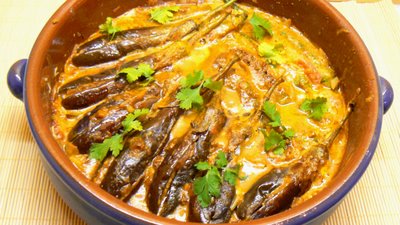 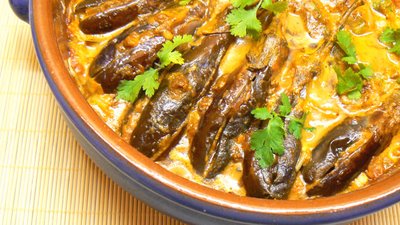 My Portion of Stuffed Baingan 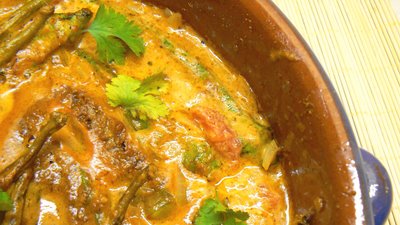 My Hubby's Portion of Stuffed Okra

Method:
Grind all the ingredients without adding any water and keep it aside.
Heat oil in a pan and add jeera and bay leaves.
When jeera starts spluttering add chopped onion and fry them till they turn transparent.
To this add chopped tomatoes and cook till they become tender.
In a mean while, slit small baingan and okra in mid way and stuff them with ground masala.
Arrange them in pan and cook them covered in medium flame.
When they are half cooked turn them over and add cream and any remaining ground masala powder.
Again close the lid and cook them in medium flame till they are done.
Garnish with chopped coriander leaves and serve hot with rice or roties. 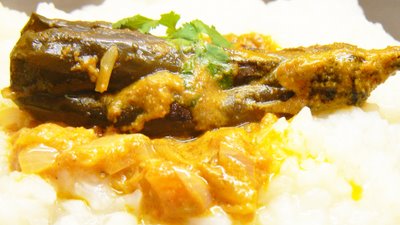 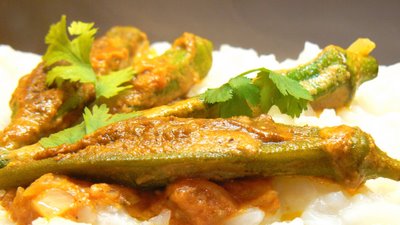 Final Verdict:
Mmm…. It was really good to eat my favourite veggie after long time. They were just perfect. While the baby brinjals were tender, okra was crisp and yummy. Because there was hardly any oil being used while cooking it was not just tasty but healthy too. Quite satisfying dish.

Note:
You can also add ginger and garlic paste while cooking. I omitted them because of other masalas being used in stuffing. So I didn’t wanted the masalas to clash with one another, just to blend well. 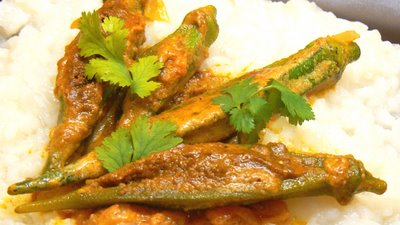 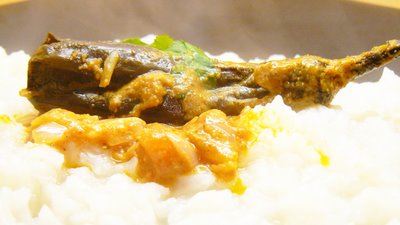